Go ahead and get all the hate and steam out. Some of you already feel irritated just off the title alone. After you're done, we can get started on the defense of my thesis. You're good? Alright, let's start.

Let me first say that this topic deserves more than a post but I'm going to try to get through this quickly and just express the main points.

Who Makes Up The Resell Market

It's no secret that the clothes reselling market is growing. You can find charts that express this in a lot of articles including this one I found on ThreadUP. 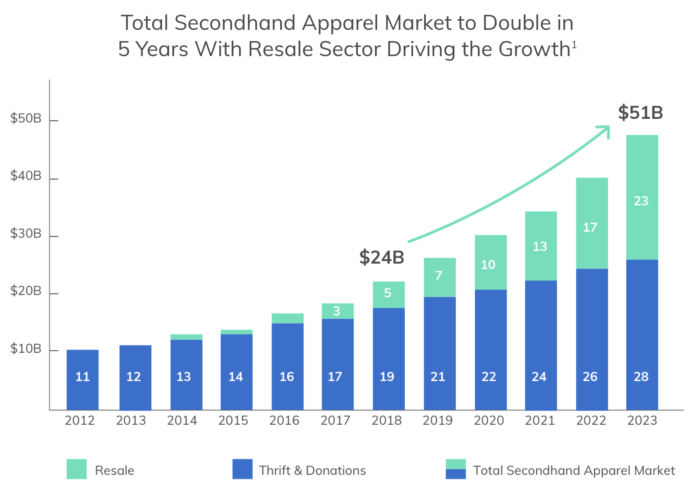 Although the growth of the secondhand apparel market is important, I won't be focusing on that in this post. Rather, look at the teal and blue bars. Note that the teal represents resellers (people like you and me) and the blue represents thrift stores (e.g. Goodwill, Savers, Salvation Army). The teal and blue bars combined make up the secondhand apparel market. Keep this in mind as we move on.

The chart from ThreadUP below cannot be overstated because it ultimately affects the supply in the market. This chart shows where consumer behavior is going with respect to apparel. 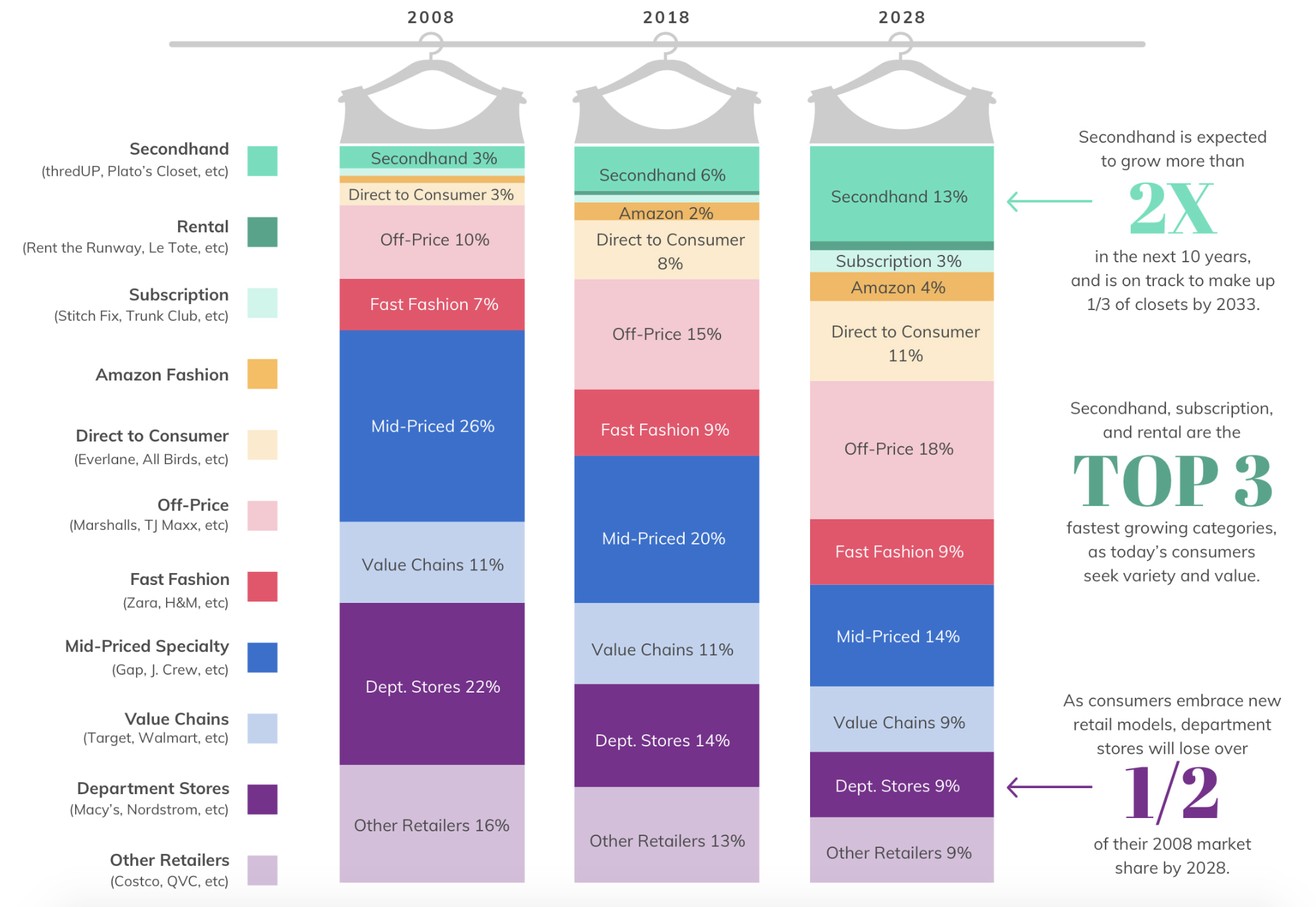 This is important because less supply will be coming from the sectors that are currently supplying the bulk of Goodwill's donations while more people will be buying secondhand. I think this will inevitably lead to higher prices at thrift stores.

My favorite author is Harvard Business School's, Michael Porter. His legendary 5 Forces of Competition Framework plays a huge role in business decision making and it applies in this market we're in. Although there are 5 forces, I'll only focus on two:

1. Bargaining Power of Suppliers
2. The Threat of New Entrants

The bargaining power of suppliers is essentially the power suppliers have to raise or lower prices. The threat of new entrants is exactly like it sounds. And since reselling is a low barrier of entry market, this threat is a real threat. Moving on...

Things just don't end up at the Goodwill Outlets (The Bins). They usually go through a process and I've made a simplified flowchart of how they end up there. 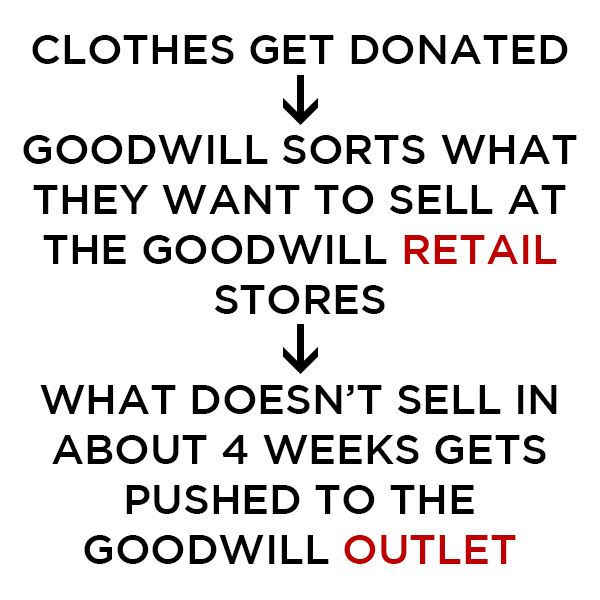 At first glance, this looks like a flowchart but I see it as a filter that gets finer as you go down the supply chain meaning there's always more items at the top than at the bottom.

Again, this is a simplified process and I need to keep it simple because it's about to get real in a bit. So far we know who makes up the secondhand apparel market, where retail is going, the 2 forces and how things end up at the bins. All we have to do is put everything into 1 complete thought.

Goodwill is creative, very creative. Beyond selling things at their retail stores, Goodwill has Ebay auctions, live auctions on their website and "Buy it Now" items on their website. Oh and one more thing, since the resale market has been growing faster than it's ever been, Goodwill store employees including managers are also getting into the action by back-dooring items to people that will pay up to have the items held for them. You're just going to have to trust me on this one.

Because there's a lot of gears going on, explaining this in bullet points will make it a lot easier to understand than explaining it in a paragraph.

Combine the above bullet points with this flowchart I made below: 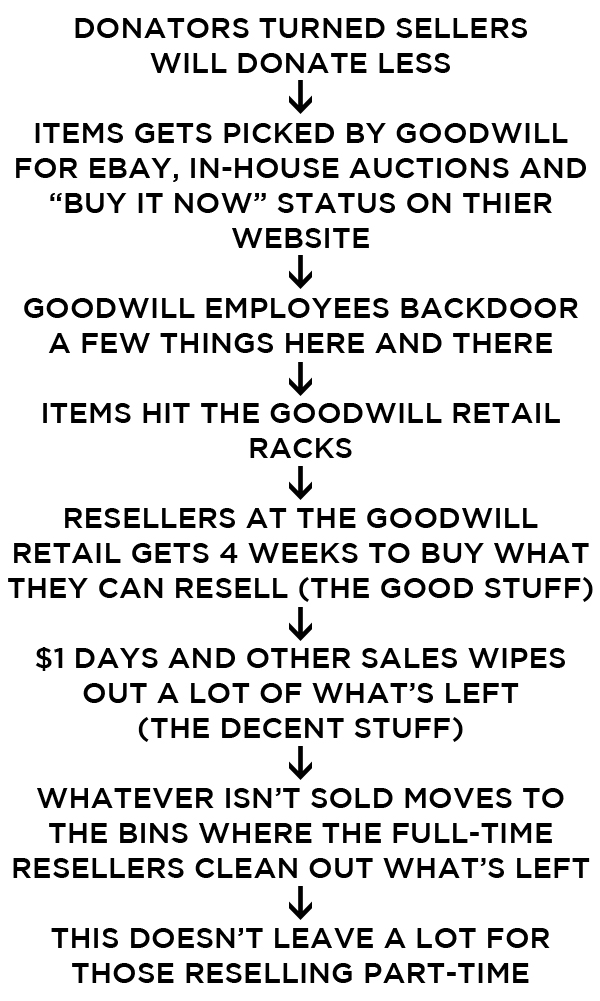 Taking It All In

I totally understand if all of this is everywhere and I apologize. The reason it seems everywhere is because so much is changing in the secondhand apparel market and it's difficult for me to get it down in words but trust me, all of this makes sense in my head. But to conclude, I don't think the future looks good for the Goodwill bins in about the next 5 years because the bins are at the very bottom of the life of a donation. The last step beyond the bins is things getting packaged up and ending up in 3rd world countries but that's out of the scope for resellers like you and me.

With so much pressure from lower supply and more demand for second-hand clothing, resellers will have to find new ways to get inventory in. I want to be clear, all of this I just wrote is from the standpoint of a reseller, not a consumer. This is a huge point because resellers can only buy something to resell if it has enough upside room. To the average customers, prices don't have to be that low because they're not reselling.

"Here's another person spewing out doom and gloom"
"Reselling has existed for decades now and nothing has really changed"
"I've been successful at the bins for years, what the hell is this girl talking about?"

Understand that the landscape for reselling is changing and like in almost every industry, technology is speeding up the process. Furthermore, I don't know how the Goodwill Outlet got started but I do know it's not Goodwill's primary source of revenue. And because it's not a primary source of revenue, this tells me that this arm of the company will be the first to be affected when all of these factors come into play.

This post represents my short position on the future of the Goodwill Bins and the resellers that relies mainly on the bins.

Now it's your turn. If I'm wrong or if I missed something, because I'm sure I did, leave me a comment below.

9 Comments on “The Inevitable Decline of Goodwill Bins”