Where Poshmark is at Today

As of this writing (May 7, 2019), Poshmark's platform gets about 20,400,000 website visits a month. When I first started in late August 2018 (about 9 months ago), the number was roughly around 18 million. This growth, as you probably know, is driven by the increased trend in reselling secondhand fashion. The secondhand market is estimated to be around $24 billion and will increase to $64 billion by 2028 according to an article I read on Forbes. Refer to the graph below for a visual representation. 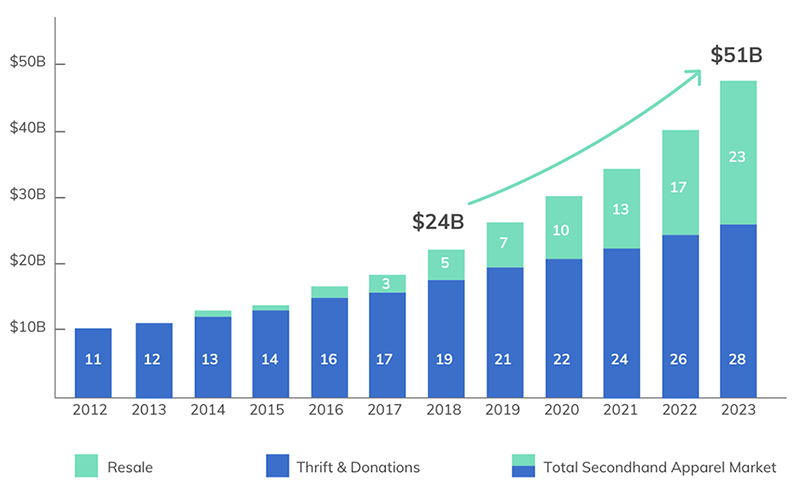 Note that this graph only goes to 2023

Although I did see different sources predicting different numbers, the numbers were all similar and all pointed to huge growth in the secondhand market. With that said, Poshmark has positioned itself almost perfectly to benefit from this growth. I say almost perfectly because there are some things Poshmark needs to stop/start doing to truly take advantage of the coming resale landscape.

Short and Sweet Headlines are Best!

The next 10 years will be an exciting time for most sellers if we know where we can fit in. I say most this because some of us has already started off on the wrong foot by not positioning ourselves for growth (e.g. accepting lowball offers, selling low quality items, selling items for a quick buck while leaving the customer with buyers remorse). This is why I'm so invested in the long game and I advise you to do the same.

With that said, here's an outline of what I think will be coming soon for us sellers on Poshmark. Note that there are other small things I belive will change but that's not worth our time to discuss (for example, the damn "Edit Covershot" filters that nobody should be using needs to be removed and a real in app photo editor should be implemented).

For those of you who don't know, a CSV (comma-separated values) file is a text file used in programs like Excel or Google Sheets. The power of a CSV file cannot be overstated enough until you try it for yourself. Just imagine being able to draft out 100's or even 1000's of listings and uploading all the information at once and just dropping in the photos afterwards. This method of listing is used by Shopify and other ecommerce platforms and Poshmark needs to get on board already. For sellers with a lot of items to list, this will change your life, I PROMISE!

You can read more or get started on Google Sheets here.

If you already know Excel or Google Sheets, brush up on your skills if you have to. If you don't know these programs, get acquainted with them because I truly believe they will be the next big thing when it comes to listing on Poshmark. But to be intimidated by what I just wrote! You don't need to know the in's and out's of these programs, just get the basic skills down and you're good to go. I'm sure Poshmark will explain it better than I can when it rolls out, so I'll end here.

Besides our profile picture and our low resolution background picture, there's really nothing different between our closets. Branding plays a big role for serious sellers and this change will aid in that.

Beyond branding, sellers need options to make better decisions with the items in their closets. I mean, why isn't there a "MOST LIKED" sorting option available already? Wouldn't you like to see all your items listed from most liked to least just so you can make more "Offer to Likers" sales? With a closet of more than 6,000 items, it's impractical for me to scroll through everything to find items with a lot of likes to offer to the likers at a discounted price.

What about allowing sellers to handpick items to show up at the top of their closet's homepage? This will bring more attention to items that have been sitting too long or trending items at the moment. We shouldn't have to "Share" our items in a certain order to get the items on top to be in the order we want!

I'm not asking for useless features like background music, or adding colors to fonts (Myspace anyone?), I'm asking for more tools that sellers can employ to save them time and to make it easier for customers to shop our closets.

$6.49 for shipping is a lot when you're buying 1 item at let's say, $15. That's about 43% of the item's cost. Let's break this down and go through the mindset of the customer when presented with such a cost for shipping.

A customer that's looking for a low cost item such as our $15 example will REALLY have to want the item to pay that much for shipping. That $21.49 will steer most customers away. Mind you, someone buying a $15 or below piece is for the most part just either impulse buying or is buying on a budget. A final price of $21.49 will cool their impulsiveness or break their budget. It sucks that we won't ever get to know how many sales we've missed out on because of the high shipping cost.

The obvious answer for me would be to introduce USPS First Class shipping and have a little checkbox that sellers can click if they know an item is under a pound (USPS First Class limits) and would like to offer the First Class method for shipping which is dramatically cheaper than Priority.

However, there's a downside to this. No tracking, having to weigh items, and paying for shipping boxes are just a few. Beyond that, the current streamlined process of receiving the shipping label via email or download would be lost for sellers. Now that I look at it on a macro level, I don't think it will be smart for Poshmark to provide this method. The confusion and friction might not be worth it.

Sorry I couldn't come up with a better defense for alternative shipping methods, I just don't think it's going to happen and it's not Poshmark's fault.

I use Poshmark's ambassador program is an ongoing joke on social media. The program is truly useless and the people saying it's worth it can leave a defense in the comments. I've been a Poshmark Ambassador for about 3 months now and I can say NOTHING has changed besides me having first dibs at Poshfest tickets. I became an ambassador because I'll sound like an idiot if I'm talking bad about something I haven't even experienced myself.

If you asked me what is the ambassador program all about, the answer is simple, I DON'T KNOW!

That't how useless the program is. There's no direction, no incentive, no distinction because every is an ambassador, and it was definitely easy to become an ambassador. The people going around putting "Poshmark Ambassador" on their social media and Poshmark closet need to realize nobody cares and it's just clutter at this point.

What needs to happen is quite simple. Poshmark needs to end their current ambassador program and purge all current ambassadors. When I think of an ambassador, I think of someone that has a legitimate presence in their respective field. In other words, Poshmark needs to go do their homework and hand pick account's that they know will move the platform forward and not just another person that get's a high from calling themselves an ambassador. Sellers that host Posh parties, blog about Poshmark, makes high volume of sales, moderate Poshmark forums should all be considered.

And what should be the benefit of being an Ambassador? How about a 15% fee rather than the current 20%. That alone is enough to satisfy a seller's thirst.

With that said, I do believe Poshmark will come up with a new or higher level ambassador program. I might be wrong about the 15% fee but I think I'm right about the criteria for becoming Poshmark Ambassador 2.0.

These are only some of my predictions about Poshmark that will affect us sellers,  but I'll think of more as time goes by and I advise you to do the same. Take time to think about where Poshmark or any platform you're on is going and how it might affect you. By doing so, you can position yourself to take advantage of the change. I think about this many times every week so hopefully I'll be ahead of the curve when the change comes.

5 Comments on “The Future of Poshmark for Sellers”