Resellers on social media are accusing their thrift stores of being greedy because they're raising the prices on their inventory. I used to think the same thing when I was roaming through my local Goodwill but then logic hit me.

*Since this is a blog geared towards Poshmark, I will be discussing inventory in terms of clothes.

Contrary to popular belief, don't think thrift stores operate to just serve those that are down on their financial luck. I can narrow the typical thrift store shoppers down to a couple of groups:

6. Those that are looking to resell

Even though I listed #6 under this heading, this does not mean thrift stores exist for us resellers. This fact is true not just for thrift stores but for ever other stores out there. I'm sure you've seen people share stories about going to Target for example and buying out a certain item because they felt it was underpriced in hopes of reselling it for a profit.

Moving forward, please refer back to the 6 groups I just listed.

Why We Think They're Getting Greedy

With no firsthand information whatsoever, most of us will assume thrift stores are getting greedier because they want to get into the reselling action that's been trending. I totally get this because I make assumptions myself without any firsthand knowledge. With that said, I do admit I agree with you guys on this to a certain extent but it's not the only reason why prices are going up.

Another reason why we might think prices are going up is due to us being on the other side of the fence. Put differently, a person in groups 1-5 will have no problem paying for a Coach bag at $30 while a reseller would be put off by the price; this is not the thrift stores fault.

While there are more reasons as to why we think thrift stores are getting greedier, I won't spend any more time on it because it's not important what we think.

Thrift stores don't want resellers in their stores, period. Resellers are not part of their business model and they don't accommodate to resellers in any way. As a matter of fact, resellers are competitors in the thrift store eyes, let me explain with this graphic I made: 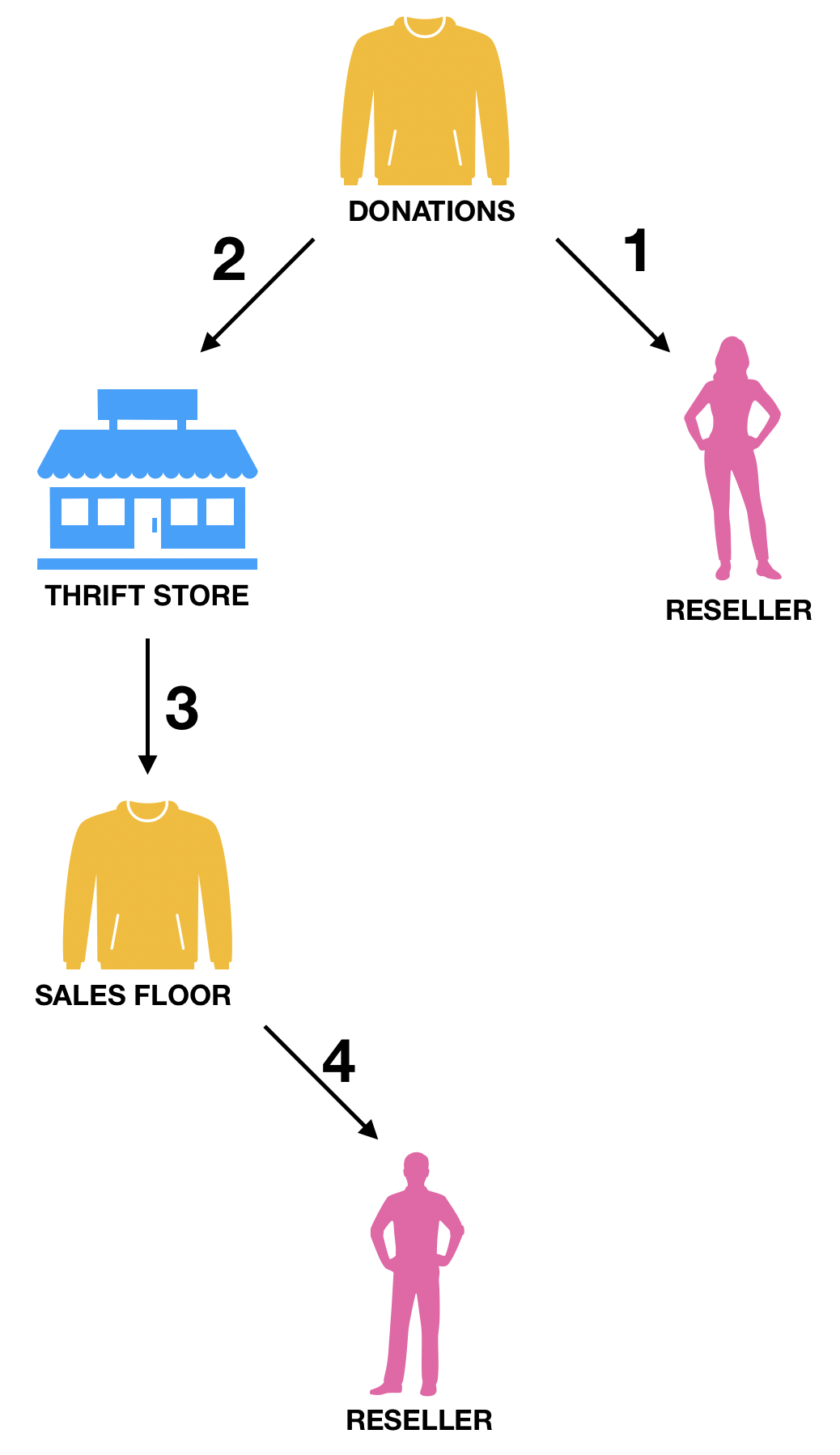 1. A portion of soon-to-be donations are scooped up by resellers to resell. Alternatively, things that people would usually donate are being kept to be resold

2. Donations are made to thrift stores. At this stage, the thrift store is already missing out on what was lost in #1.

3. Donations are turned into inventory when they hit the sales floor

4. Resellers buy up inventory at a disproportionate amount

By studying the flowchart, you can see that inventory is choked not just on the front end (4) but also on the back end (1). This is why thrift stores don't like resellers. It really comes down to supply, and with supply you must mention demand.

The Supply and Demand economic model is really the culprit here. Some of you might already have connected the dots but I'll explain anyway.

Nothing is infinite in the supply world, ever. When the thrift store existed with only groups 1-5, it was easy for them to keep inventory stocked because those groups, for the most part, only shopped for items they liked that were in their size. But with the influx of resellers, supply is leaving the sales floor faster than ever. A person in group 1-5 might only find 3 pieces in their size that they'd actually wear but a reseller will buy 50 because their size a style is not a factor.

Admit It's Our Fault

Think about it, it's illegal for thrift stores to bar resellers from shopping at their stores. With that said, there's really no positive solution they can employ to make everyone happy. If they keep the prices low like they historically did, resellers will buy up more inventory, inventory that is finite. If they raise the prices to deter resellers, they will simultaneously deter their core customers (Group 1-5). As you can see, thrift stores are in a really tight space and it's because of us resellers. If you put yourself in their shoes, hopefully, you can more empathetic.

Furthermore, I don't think that they're raising prices because they want resellers to pay more for the inventory. It just doesn't make sense because if there's not enough room for profit, resellers will simply leave.

My point is we're only looking at it through a reseller's lens while neglecting to understand it from a thrift store's perspective.

Eventually, prices will be at a point where thrift stores and resellers are left at a standstill. If they don't go down on price, we won't buy. If they go down an inch, resellers will take that inch. It sucks for me to say but I don't think there's a long term solution for this growing problem.

Now, corporate thrift stores like Goodwill are truly getting into the reselling action by doing just that, reselling. If you don't know, Goodwill is leveraging Ebay by having their own online store and their own auction website to sell donations at premium prices and I don't blame them.

As resellers, I think we need to stop doing some things that will perpetuate the problem:

As resellers, I think we need to start doing some things to hedge our risk for the future:

Of course, this post can't end without me addressing those that think I'm making the situation sound worse than what it actually is. Sure, reselling has existed way before Poshmark and other clothing selling apps. Sure, you've always been able to find inventory almost on demand. But you're forgetting how much the game has changed with respect to the pace of how things are growing. Reselling secondhand clothing is one of the hottest gigs and it's not slowing down. This means more players and more buyers and the old rules you've been playing with won't matter.

Knowing this, I still try to improve every week on not just my process but my sourcing. If the thrift stores are changing with the environment, it's imperative that resellers do the same.

I'd really love to hear what you guys have to say about this one, comment below.

9 Comments on “No, Thrift Stores are Not Greedy, We Are”